Whether or not you consciously thought it, what you wanted and expected when you became a parent was a chain of command that flows from parent to child. At some level of consciousness, you correctly intuited that children have three jobs:

You are also correct in thinking that your primary job is to help Junior fulfill the first two, which are responsibilities, in order to access the third, which is a privilege. The reality for most children in developed countries is that fun is going to include using technology at times. You have considered this reality before and have reconciled it to some extent, perhaps deciding that fighting overuse of technology is a “good problem” to have. But even if you are completely okay with your child using technology, the overall organizational structure you have in mind looks something like this:

Let’s refer to this diagram as the Ideal Hierarchy: the parents and teachers are united in guiding the child, who in turn balances the three jobs of being a kid.

If things have gotten pretty messy in your home with regard to screen time and determining who’s in charge of it all, the chain of command has become inverted. It probably looks more like this: 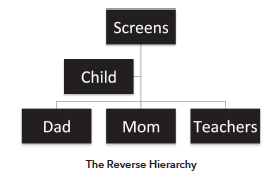 Let’s refer to this diagram with a term from Family Systems called “the Reverse Hierarchy.” In this scenario, technology is in charge, and the humans have become the devices. In this scenario, the sci-fi movie your kid stayed up watching last night just came true in your living room. Further, notice that the adults are the humans at the very bottom of the pecking order—and that they are fragmented.

A classic Reverse Hierarchy paradigm would be that Mom thinks Junior needs to tighten up on his responsibilities, while Dad thinks Mom is being too strict on Junior. Junior’s teacher empathizes with both viewpoints but doesn’t care how the parents do it, as long as they get Junior to turn in his math assignments. The difference of opinion among the adults is readily apparent to Junior, who experiences the adults as divided and conquerable. Junior determines he can sneak screen time while his parents consult their friends about how to help him get his math done. Junior has no idea how much control the game actually has of him, but he knows he is fulfilling his favorite job: fun. He knows playing the game helps compensate for the miserable time he had during math class that day. He also knows it is especially fun to thumb his nose at the fragmented system the adults cannot seem to streamline and coordinate. The game plays the kid, who plays the parents and teachers.

If you doubt whether the game is playing your kid, ask yourself why he doesn’t answer when you invite him to do something as pleasurable as eat. If you doubt whether your son is playing you, ask yourself who is left frustrated at the dinner table when he keeps playing the game instead of coming to dinner. If you have had to resort to texting your son to get him to come to dinner, that’s the Reverse Hierarchy captured in one interaction. The Reverse Hierarchy contributes to the pollution in your family fishbowl. But how did a Reverse Hierarchy come to reign in your home?

The Over/Under
In sports, the over/under is the predicted total number of points scored by both teams; gamblers then choose whether the actual number of points scored in the game will be higher (over) or lower (under) than that predicted. In home environments where the Reverse Hierarchy reigns, parents are working harder than kids are to solve the screen problem. So it can be said that the parent is overfunctioning and the kid is under-functioning. For our purposes here, that situation is the over/under.

In the preceding Reverse Hierarchy example, when you are left frustrated at the dinner table, repeatedly calling for (or texting) your son while he’s still playing the game, you’re over-functioning relative to the minimal level of effort one can expect parents to put forth to invite their child to dinner. And your son is under-functioning relative to the already minimal level of effort one can expect a child to put forth to come to the table.

During a recent session in my office, some very patient parents kindly asked their teenage son how he would like them to get his attention if they needed to notify him of dinnertime while he was wearing a headset and playing a video game. They told me they’d tried calling to their son, but he did not seem to hear them. They asked their son if they should knock on his door instead. He replied with the following imperative: “Come tap on my headset, and I will talk to you.”

His parents were just about to agree to do so when I stopped them. I pointed out that in such a scenario, the game would have come to command such power that the boy couldn’t even respond to his parents (even when they were calling him for dinner!). I suggested that the game was essentially playing the parents as well, making them tantamount to butlers by requiring them to travel to their son’s room, walk to him, and tap on his headset so that he would grant them a moment before his throne of entertainment.

Had it played out, the preceding scenario would have constituted another classic Reverse Hierarchy, with Junior under-functioning and Mom and Dad over-functioning. It’s no fun to discover the Reverse Hierarchy and the over/under are operating within your home. So let me remind you that we’re taking the time to do so because placing your family’s screen problem in context is necessary preparation for improving that context.